There and Back Again

Invermere and back... Chris and I had talked about this flight for years, and if things had turned out the way I had imagined, we would have flown this flight together. The toughest flight of my life and an emotional one. 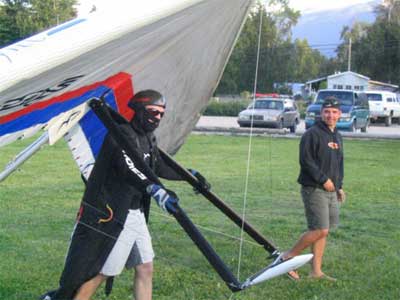 The first leg went well, taking only 2 hours to 100km South of Golden, in a 10km/h tailwind. Things were looking good for the return leg because I wasn't expecting to have any problems making it back.

Unfortunately the wind picked up to 20km/h, which was a little unfair, but made it interesting. Being slowed on glides and drifted back on climbs wasn't the problem. A 20km/h North wind makes the Golden range grumpy. All the leeside effects make the range much more challenging than the windspeed would suggest. It took 5 hours to get home... in the roughest conditions that I've ever flown in.

On the way down to Invermere, things were easier because it was early; I could fly the back range, and skip most of the lee areas. But fighting the headwind late in the day brought me into the lee constantly. All the windward slopes were producing smooth 1.5m/s thermals that drifted me away from Golden. I was making progress, but I realized that I wasn't making ground fast enough to reach Golden before sunset. 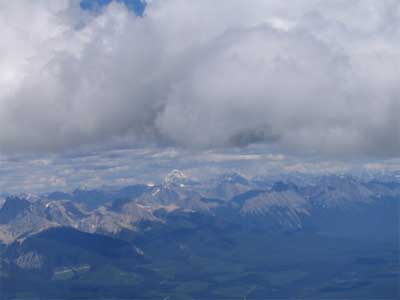 Had to try something different so I started diving deep into the lee to battle some angry dragons. Each glide into the lee slopes was more like a plummet than a glide. The wind and sink brought my glides into the low single digits. Plus the turbulence had me flying straight and level only part of the time! These fun-house monsters delivered 5m/s climbs with little drift, and although they were very rough, they got me home.

One rough bit of air had me hitting my keel with my feet, then falling back down to the basetube. Kept my grip on the basetube and things turned out alright. Twice I was rolled over onto my back as I was ejected from strong lee-side thermals. But thermalling between 60-80km/h, I had enough speed to hold almost 1-G as I followed through into wing-overs. I have even more confidence in my Litespeed S now, after watching it handle that kind of air. 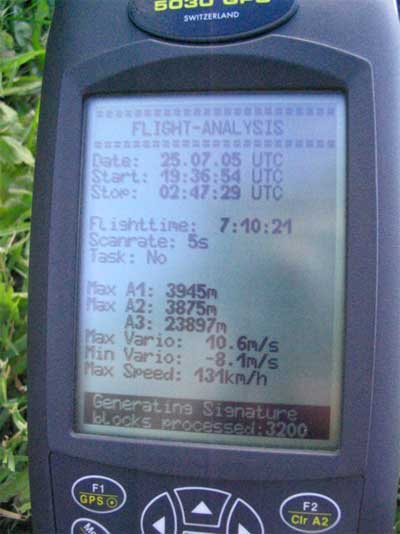 When my Flytec 5030 final glide numbers became positive, I almost couldn't believe it. Went on final glide, thinking that everything was cool, until I didn't quite clear Pagliaro and had to fly around it, against wind and sink.
Was left scratching in light ridge lift about 4km from goal, in the shade and turbulence, thinking that there was no way to make it. I was so tired that with the VG off my glider felt like the VG was on.

Anyways, a bit of patience, a final dose of energy, and some luck brought me in to Nicholson at 8:45pm. So tired that I almost felt too tired to land, but I still had enough energy to drag my fingers in the grass, just to make sure the surface was suitable for landing.

Flew my heart out, fought leeside turbulence, and the unrelenting headwind, until I had nothing left to give. Didn't know I'd make until the last 2km.

A number of years ago, Chris, Bernie, and I were flying our paragliders South on a big day during the Canadian Nationals. It was a special day because we were able to start unusually early, and hit Canal Flats by 7pm.
Bernie and I did around 160km and Chris around 250km. The point is it was a special day, something that you can't really plan for. It just happens so you take it in.

I remember Chris coming on the radio, and in an excited voice saying, "Once in a lifetime, boys!"

Flying Golden this year reminded me of that flight often. He was right, many things in life do happen only once, if at all; we just don't realize it until later. Moments that are so unique, so life-affirming, that they really can only happen once. One thing is for sure, I want my life to be a series of once-in-a-lifetime moments.