Compared to the paddock conditions in Australia it is time to have a look on the flying conditions in the northern hemisphere during these days. 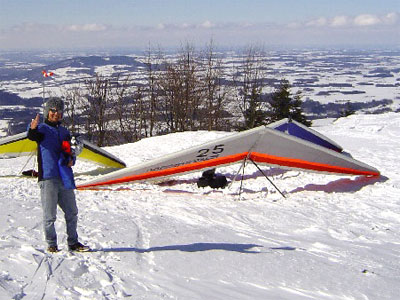 Professional car companies test new cars in extreme hot but also in extreme cold temperatures. So do Moyes hang glider pilots! It is well proofen that Litespeed models cope with the hot paddocks of Hay. Last weekend I moved out to test the opposite. 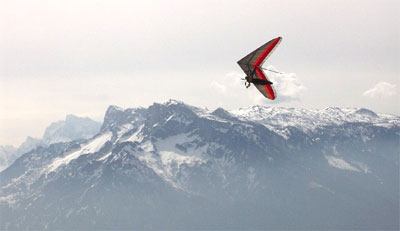 After a strong winter with a lot of snowfall in Austria I was driving up the mountain between hudge walls of snow beside the street. Instead of my snowboard I had my Litespeed S 4 on the roof wrack. A lot of mountain roads are closed over winter time in Austria - but not the one I need to take off! Just 20 min away from my home place my XC-flying site is available all year round.
At take off the surface of compact snow was 2m over ground level. Just the end of the trees were sticking out. Sunshine was already producing thermal activity as you can see at the picture's horizon looking north to the austrian flatlands. Due to a strong northerly wind at take off (see wind sock) the air temperature felt twice as cold as the thermometer was showing. That meant minus 30 degrees, 30 km/h north wind and just one question: why doing this. Basic requirement for a Litespeed testing – Time to fly!

In the air the glider felt extremly stiff like frozen. Already building up the glider the mylar sail was making a funny, crunchy noise like walking over cans and it was painful holding the cold battens. Here I remembered Bill's last words in Austria saying: "Hey, this feels like Hay". Good one!
Flying straight the glider felt stable like a rigid. I wished to have a rigid wing model beside me to make some gliding comparison now but non of these old folks were around. Well, in arctic flying conditions on sundays I would have prefered sitting in front of the oven, too. Furthermore I would also not like to depend on cables and flaps in freezing air. Instead of that my body and veins were working quite well under three layers of thermal clothes. Compared to +45 degrees in the paddock and -15 degrees on the mountain here gliders have to deal with a difference in temperature of 60 degrees. Quite great demands on robustness and strength of bending materials. Especially for the carbon spars and fibre glass tipps. Under the sun of the paddock the air temperature between the top and the under-surface of the sail can reach +80 degrees and more. In this heat spars and tipps have to retain its load-bearing capacity like they have to at -20 degrees. That makes a difference in temperature of 100 degrees!

Gliding straight I had to give stronger stearing impulses than usual to keep the Litespeed on a straight line. Circling in thermals the glider had a strong high siding. The handling suffered from the glider's stiffness like the pilot did from the coldness. Again the essential metamorphosis between handling and pilot revealed itself.

After one hour and 20 min I guess I set up a new record of staying airborne with frozen fingers and toes. But the material testing of a Litespeed S 4 in an arctic trough was successfully cool and high Litespeed standards did prevail.