About 14 months ago I bought a year-old Litespeed 4 with about 100 hours from an active competition pilot. Since then, I put about 30 hours on the glider and have been very happy with its performance and handling. It came with a competition control frame (special downtubes and carbon fibre fared basetube).

Last Sunday, while assembling the glider at the Pulpit, a site near McConnellsburg PA, the right downtube fell off the point of attachment to the keel. The very small nut on the bolt securing the downtube to the U-shaped housing (attached to the heart bolt) had come off completely, allowing the bolt to fall out and the downtube to become detached from the keel. The nut securing the bolt on the other downtube was loose as well, but was still on the bolt. I found the loose bolt and reattached the nut. (On the right downtube, a very thin screwdriver must be used to get past the VG cord and reach the deeply-recessed bolt. The bolt is tightened into the nut, which will not turn as it secured in a small area). The left side also needs a thin screwdriver, however, it's easier to reach due to the absence of the VG cord. Even when fully tightened, the bolts do not extend beyond the nylon locknuts (the bolt ends are level with the nylon; showing no threads at all).

Since these bolts are critical points and probably loosened over an extended period, I would have detected them had I been conducting a complete and thorough pre-flight checks as called for in the Litespeed manual. Therefore my own negligence led to the unsettling sight of a downtube falling from the glider during assembly.

The nuts, however, are very small and may be overlooked by pilots using similar control frames on Litespeed 4s (I don't know if the Litespeed 5 competition control frames have similar bolts). If tightening them does not result in about three threads showing beyond the nylon, I strongly recommend removing them and using locktite to add an additional measure of security, then inspecting them carefully during preflight checks.

We thank John for his diligence in advising us of this situation.

We have investigated the situation and will be making changes to the upright top end in the future. The change will allow the nut to rotate in the upright fitting. 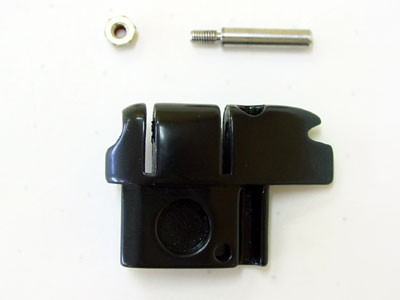 The components consisting of; Upright End, Bolt and Nut.

In its present form, the nut is fixed when tightened. It is possible that in some situations the keel mounting bracket may grab the bolt, rotating the bolt within the fixed nut. This is unlikely as the locknut has a firm grip when properly tightened. 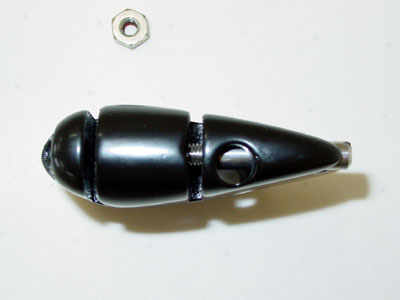 Zoom upright end with bolt fitted. The hole at top of fitting is for the VG rope.

When properly tightened, the thread should extrude past the nut by at least one complete thread. If you find that the grip on the lock nut is not tight, then either replace the lock nut, or as John has suggested apply some locktite. 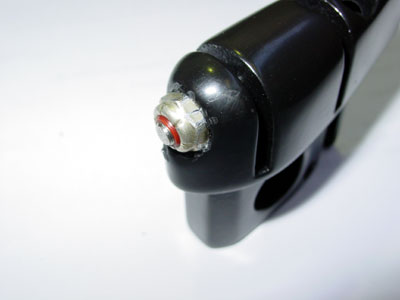 The fully assembled upright end with the bolt properly tensioned.