I managed to get a little sleep before waking up and assembling gliders in preparation for the competition.

I was now on Brazilian time and before I knew I was leaving Rio en-route for Andradas at 7pm the night before the comp was to start.

Nothing goes as planned here so you just need to sit back relax and enjoy the ride. It was friday afternoon and peak hour traffic was as far as the eye could see. 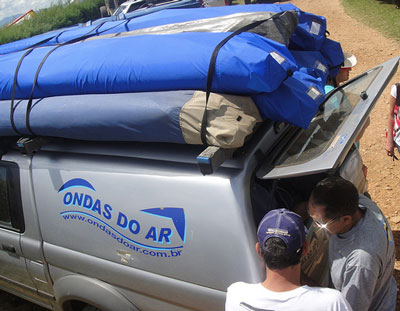 We ended up getting to Andradas at 6am the next morning after spending nearly 12 hrs in the car. I managed to get 3 hrs sleep before rushing up the hill to fly the first day of the comp.

When I arrived there, pilots were already taking off and there was only 40 mins until the first start gate. I quickly set up my glider downloaded my Gps set the course and ran off the hill. I was lucky to get a good climb out of launch and fly the 7 kms to the start gate. 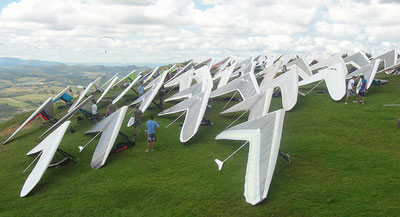 I just made the last start gate with Dustin and we were pushing hard to catch the rest of the pilots in front of us. As we rounded the 1st turnpoint we caught the gaggle that had started 15 mins before us.

I was looking out for the good pilots and quickly found Andre Wolf and teamed up with him. The flying was up and down as they had some rain in the lead up to the comp making things wet.

I got in front and hit a good thermal at the 2nd turnpoint and Andre joined me while Dustin had fallen behind in the gaggle. We now had only 35kms to goal and after finding two more thermals we were on final glide.

I arrived 5th into goal just behind Andre and will win the day being the fastest pilots around the 78kms course. Many pilots made goal and it was a great feeling to be here flying with all my Brazilian friends again.

I woke up after party night here in Andradas and was feeling a little average. I still had only managed about 10 hrs sleep since leaving Australia.

It was a similar looking day to the first day except the winds on launch were light to moderate from the west. A 106km task was set with 3 turnpoints and goal back in the south bombout near town.

It was a tricky day for getting off the hill as most people were lined up on the ramp in a single file. Dustin and I stayed on the north launch waiting for the wind to die so that we could run off there.

20 mins later we were still waiting and about 10-15 pilots had made it off the other launch and were climbing out. There was no way we could line-up there and get off in time for the start gates so we keep waiting.

Eventually we got off the hill and and climbed out to cloud base. I headed out to the north-west and a few pilots followed me onto the plateau. I hung around out there for 30 mins until the last start came around.

I headed out on course line with two other pilots towards Sao Joan and found a weak climb. It was a day that was changing fast and you needed to be prepared to change course at anytime to stay in the air.

The thermals were short lived and it was important to push hard when the clouds were forming and stay high when it was over clouding. As I got close to the first turnpoint I realised some important things that I had forgotten to do.

I had no phone, no map and no phone numbers to call when I landed. Today was looking like one of them days were the task was going to be to hard and an out landing was high on the cards.

I still had one pilot with me and I was keen to drag him along in hopes he could give me a ride home when we landed. After the turnpoint we got separated a little so I just stayed high to give my self the best chances.

I soon found myself at the second turnpoint high and now facing a headwind of 20 kms to the last turnpoint. The sky had formed up nice now and I found a 800fpm climb on course line.

When I topped out I noticed a gaggle of about 15 pilots upwind of me climbing so I headed for them. I soon realised they were all heading my way and I passed them with a big smile on my face.

I had an amazing glide into the wind and did not stop gliding right into the last turnpoint high. There was rain only about 5 kms from the turnpoint and I knew that the others would be lucky to get back before it hit them.

I did a long glide in shade almost tailwind towards goal. I had only one more chance of getting up as there was some sun a long way in front of me. I had to fly over a small hill and in the rotor I spotted about 50 birds circling. I arrived low and struggled to stay in the air only 7kms from goal.

After about 10 mins I had climbed enough to make the final glide into the landing field. There were a lot of people there to cheer me on as I crossed the goal line and a sense of satisfaction had now set in.

A huge storm dumped where I had just been climbing in my last thermal, at this point I knew I was going to be the only one to complete the task. With the help of a few others I quickly packed up before the gust front hit us.

So much rain fell that we were lucky to get back to town on the small dirt roads. We got stuck once and went through some big puddles flat out to make it.

The rain stayed with us and unfortunately we never got to fly again in the comp. It was now time to head back to Rio De Janeiro for a week before embarking on my next journey to America.