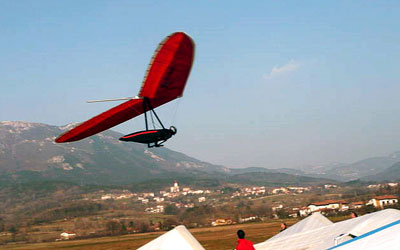 It's just middle of March and the european comp season has already started!  After the first two comp days of the Aeros Winter Race with stormy winds and snow showers the weather forcast reported warm, sunny skies over the weekend in the south of Slovenia.  On the third day, a cold and freezing friday morning, I jumped the car with Guenther Tschurnigg.  Together we were making our way down south joining this new event. Our Litespeeds on the roof racks made it thru heavy snow fall on the north side of the the alps when after the big tunnel sunny skys welcomed us on the southern side. Our plan looked good!

After speed breaking 3.5 hours of driving we just arrived at the head quarter in time. We could get registrated in the very last moment, packed up our gliders on the bus and our winter race continued onto a sunny launch place - let's fly! 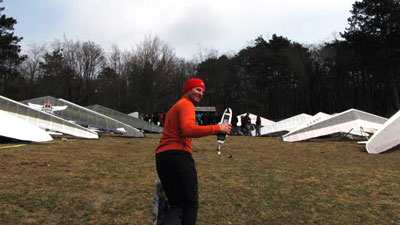 The first task was a 70 km Jojo along the main ridge with three turnpoints. After a close first boje most pilots stayed at the dynamic ridge lift which was weak and overshadowed. I gained enough height to glide out to the flats where some nice cu's were forming. The flats worked good and I could take the lead heading out alone to the 2nd turnpoint. But 10 km after the boje weak lift stopped me and the gaggle could catch up. Oleg, Elio, Stanislav (local pilot) and me were now going for the last 20 km: 10kms to the 3rd turnpoint and back to goal. After crossing the valley low three of us turned into a thermal while Stanislav kept on gliding next to the ridge.  He knew something what I wanted to know too and I started to follow him. And in fact: the ridge lift worked and with a dynamic glide we could make it straight to the last turnpoint. Same style soaring back before we went out to the valley towards Goal. The guys behind us could not catch up again. 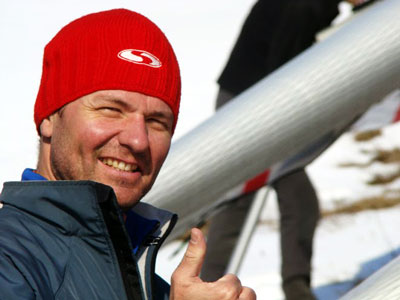 2nd task: 96 km Jojo along the ridge with a tricky turnpoint out in the valley

High cloud base between 1.800 - 2.000 m and westerly winds expected good flying. The leading gaggle of five pilots had a quick, low run of the first 60 km along the three ridges when now gaining height for the turnpoint 10 km outside in the valley. And finally the gaggle splitted up when heading out. Three pilots, Elio, Franc Peternel and Manfred Trimmel went right, Primoz left and Tom straight. As the lowest in front I had to take the risk going immediatly to the turnpoint while the others first went for a thermal trying to stay high. After making the boje I could find good lift gaining just enough altitude to make it back to the ridge. Elio and his company were already high over me to the left also on their way back. But they could directly go to the 2nd last turnpoint at the end of the valley while Primoz and me had to make a little detour getting back to the ridge. There we found ourself together again wing to wing! The ridge lift was good and with a fast ridge run we started to catch up. But Elio and Franc could get to the turnpoint first and went on final glide for the last boje 2 km before goal. Primoz did not trust the ridge and took another thermal, so I kept on chasing the two gliders in front of me till we crossed the goal line 15 min later. 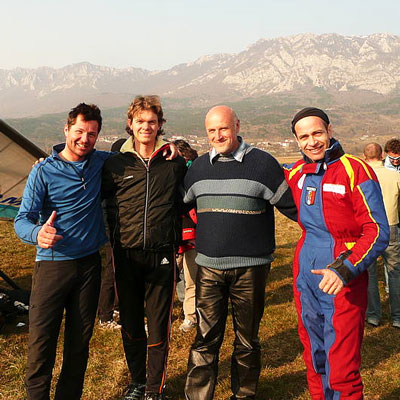 Last day, 3rd task: 99 km with another tricky turnpoint in the flats – the final show down!

Mostly blue skys and shortly living cu's let the pilots struggle on course. Due to a higher altitude at the first startgate and a faster glide I got away from the field and took a good lead. I had a pretty good but lonesome run the first 70 km. When coming back from the turnpoint out in the flats I was scratching the foot hills of the ridge. The thermals were narrow and broken which took me some time to get back over the ridge. Then suddenly and out of the foggy air Primoz came along chasing me. I have lost all my confortable lead. The next 10 km I still stayed in front before we had to make the next valley-crossing. Primoz took the risk making the crossing without gaining height while I took a thermal. I knew that Elio had taken the 2nd startgate so tactically I considered to fly fast and save into goal to win the meet. After crossing the valley Primoz could manage to find the better lift and from now on he took the lead. Close on his heels we were making the 2nd last turnpoint 2 km out in the valley. After getting back to the dynamic ridge lift we were racing 10 km along the ridge, turned around and headed the same way back into goal. With 20 seconds difference we crossed the line in 2 h 13 min and it was quite sure that I would win the meet. Conditions were not easy like the 99 km task setting, therefor Primoz and me had a pretty good run of 42 km/h average speed. 5 min later Mario came in and another 10 min later Davide and Oleg. Finally 16 pilots could make goal.

The Aeros Winter Race 2010 was an interesting new competition, tricky flying with cool air and hot racing already in March. Compliments to Aeros for this new event and special thanks to the organisation who did a great job! The european season could not have a better beginning – especially for me! 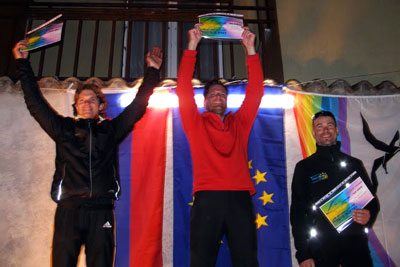