Moyes Base Bar and Upright Fittings

During the Flytec Race of Champions competition at Quest in April 2007, Brazilian top pilot Guga Saldana experienced a failure of a bar base fitting whilst aero towing from a dolly. During take-off, spectators reported hearing a crack, and as the hang glider became airborne the base bar separated from the upright on the left hand side. While the carbon cross bars prevented the glider from folding under positive load, the back up string from the flight instrument was now the only thing that connected the base bar to the upright. The instrument was mounted to the base bar and the back up string was tied to the rear wires.

In this configuration the glider was barely steerable, the glider went into a shallow bank and went into some nearby bushes and trees – the glider damage was reasonably severe, but Guga luckily walked away with not more then a few scratches.

Upon careful examination of the parts, it has been determined that the base bar and the fittings were not fitted at the factory and were the result of at least one aftermarket repair. It is apparent that the failure occurred due to the following reasons; 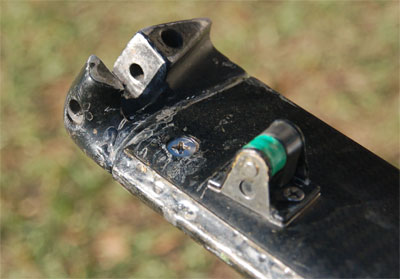 The right hand (VG) side of the base bar. 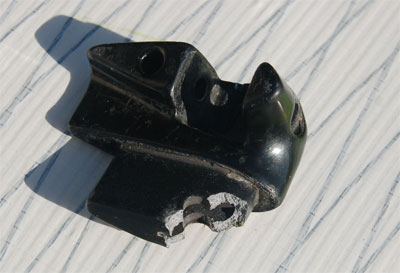 The broken component showing the painted surface which mates with the base bar.

As part of the manufacturing process, the base bar fitting is painted and heat cured. When the components are assembled at Moyes, the paint from the mated surface is removed. This method ensures the following; 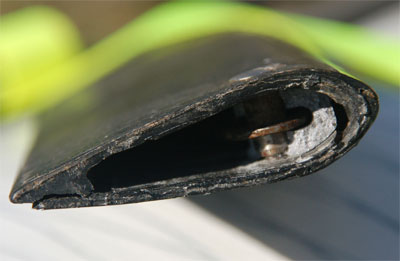 carbon fibre shell of the base bar showing repair and damage.

When the ZOOM base bar is correctly assembled, it provides an extremely strong unit capable of handling loads well in excess of those required for normal hang gliding operations. Moyes can not guarantee, nor recommend, the use of components which have been manufactured or repaired by third parties.