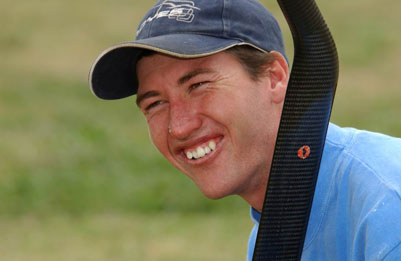 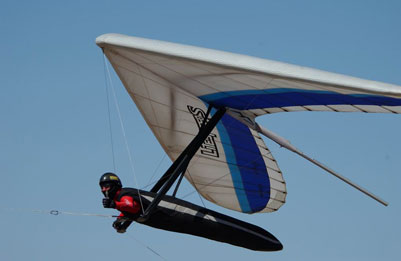 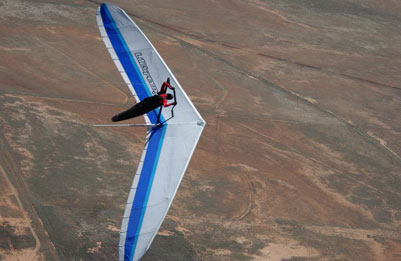 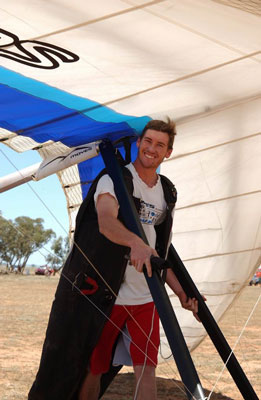 When Jonny was 8 years old his Father learned to fly hang gliders. His father became very interested in his new sport.

Jonny learned to set up gliders, talk on the radio, and help his Mum navigate retrievals. He also gained valuable experience helping at competitions. Jonny started flying tandem with his Dad whenever he got the chance. He had over 20 hours of tandem flying experience before he reached an age and size where he could learn to fly. In 1995 Philthy (Phil Pritchard) took Jonny through his training and he was finally flying solo.

His first glider was a Moyes XT145 and he tried to get as many hours as possible, which even meant taking days off school to go flying. After about 100 hours Jonny upgraded to an Xtralite 137.

After just over a year of flying (about 150 hours) Jonny went to Hay, where he was the tow driver for the Canungra Team. He was able to tow up and fly after his team was airborne, and he achieved many personal bests, his furthest flight was 163kms.

In 1997 he competed in his first competition at the Bogong Cup and finished 3rd place in "C" Grade. He also placed 3rd "C" grade in the Canungra Classic later that year.

The day after he graduated high school in 1997 he broke his shoulder whilst skateboarding. He missed the competition season in '98 but gained experience working at the "World Championships" at Forbes.

In September 1999 with about 800 hours and 4 years of flying experience, he went to Sydney to pick up his new Litespeed 5. He was awarded the 1999 B-Grade Sporting National Champion . In December '99 he set a new personal best when he flew from his local site in Beechmont to (near) Goondiwindi, 260klms.

With his new Moyes Litespeed 146, which he had just purchased, he flew Manilla (NSW State Titles) 2000 and placed 1st overall, his first victory.

He went to Spain in July 2000 to compete in his first overseas competition. The Spanish Nationals were held near Granada, (South Spain), with 100 pilots competing and he placed 3rd overall. He then competed in the Pre-Worlds in Algondonales, Spain where he came 31st overall.