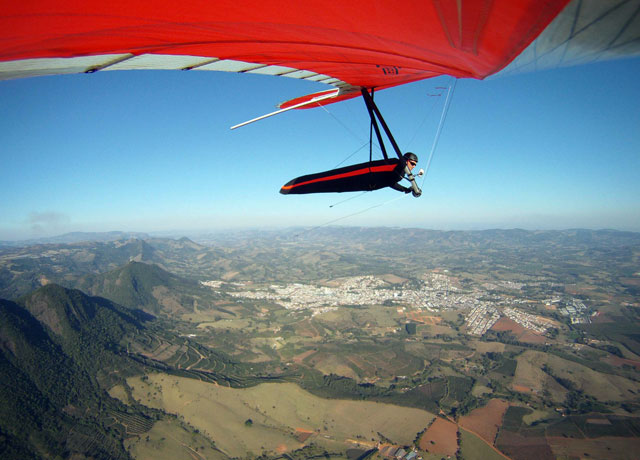 I got my new litespeed S 5 a month ago, already I had three flights with it. I really love it!  It’s so much fun I can’t describe.

I upgraded from my old glider, and it seems I was riding a mule wagon and now I am on a Lamborghini!!!

Thank you so much for making such a nice glider.

All the best,
João

Wow! This glider is sweet. The handling is amazing, on glide it is solid like I've never felt before, and it noticeable slows down much better than the old cut.

I've had three flights and I'm not going to change a thing. See attached pic of first flt. This is twenty miles out from Mingus Mt, the town of Sedona is directly below me. I went up the canyon behind my trailing edge to land in a meadow south of Flagstaff near leading edge tip. The canyon in the top left corner is the well known Oak Creek canyon.

The next day I tested your stability set-up. I went over the falls to the point of a hand stand on the basetube before it abruptly righted itself. Your sail install fee was the best money I've ever spent! I made a half hearted attempt to stay up, but landed and drank beer the rest of the day.

Yesterday it was glass off sunset flight that was just magic!

Thanks Kraig, Jonny, Moyes and the Sail loft. 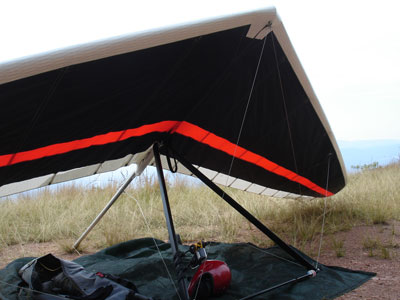 I write this letter in order to thank you for producing the most fun toy in my life. Four month ago I purchased a Litespeed S5. After having worked through the foreign currency exchange hassles it arrived! I quickly set about assembling it from breakdown length. The glider just looked outrageously aggressive. The black undersurface and Zoom A-frame is just spectacular. The extremely high quality of craftsmanship is immediately evident and installs a large amount of confidence when I know I will be flying 10m/s carnage.

But enough of the looks, I bought it to fly. After having received well wished from the entire South African Hang Gliding community, who was of the opinion that I will now get my self killed in a matter of days, myself and my best mate, Gerhard, set-off to the Lowveld for the virgin flight. The fact that I used to fly a Falcon 225 before might have lead most people to doubt the sanity of my purchase. I also boost a large collection of X-rays and broken bones from my hang gliding and motorbiking exploits, so crashing seems a part of life.

On the mountain I found rigging and absolute joy. The conditions were perfect and the take-off sweater than I could have imagined. With the carbon fiber outer leading edges I found the control to be very light and easy. Placing the glider in the exact spot in the air was possible from the 1st minute. I thermalled, stalled and played for nearly two hours until thunderstorms forced me to land.

Now having survived the take-off I was sure to get it on landing. Not so, the landing was spot on, a no stepper. Out of more than 25 landings I have had more than 20 of then as a no stepper, a real complement to the effortlessness of landing for the glider, as they have been at 5000ft ASL, 300C and mostly no wind landings.

I can truly say that this glider has changed my flying. I average 1 hour 42 min with numerous flights over 2 hours. I continually find that I reach my cross country goal, and then turn it into an out and return. What has me most exited is that I am probably only flying the glider at 20% of its potential, which is sure to increase as I clock up the hours. There are no vices and no surprises, just fun!!!

The Litespeed truly disproves all the myths about topless gliders. The rankings in the 2007 Worlds makes sense, now that I have flown the ONE.

Hope to see you at cloud base